Bernie Blindness and the U.S. hatred of Socialism

Updated by marco on

Bernie Sanders is doing extremely well in the campaign for presidential election in the U.S.

And he should be doing well. His basic message is:

Lets stop fighting over table scraps; instead, let’s get a real meal—take it, if we have to—stop being dicks to each other for four years, and see what happens.

There is still almost a year to go until the election in 2020. The campaign is already more than a year old. I can’t think of another country that starts campaigning more than a couple of months before elections. It’s utter madness, but it is what it is.

Sanders is doing well despite being deliberately ignored by not just the Democratic Party but also most of the U.S. mainstream media. There is an album called Bernie Blindness (Imgur) that is full of screen captures showing the contortions the media takes in order to ignore Bernie’s leading presence in the race for nomination. For example,

If you’re interested, there’s a whole subreddit dedicated to tracking the phenomenon. It’s an absolute scandal, but it’s unsurprising given the history of media in the United States. Take a look at Hate Inc. by Matt Taibbi for much more detail on that.

Bernie is very clearly being railroaded off of the Democratic nomination. This has already happened once, in 2016. At that time, Bernie pledged his support for Hillary. That was a mistake. He should not do anything of the sort again.

The only advantage to him running as a Democrat now is the paltry coverage he gets and it gives the Democratic party a chance to cement its reputation as just as duplicitous and self-serving and anti-democratic as the Republican Party.

The Republicans are all-in with Trump. There’s no going back for them. They’ve made their deal with the devil and are too far down that dead-end to turn back. Sunken costs and a blindness of their own has sealed their fate. To be sure, it is still very likely that their fate will include having a two-term impeached president.

But I really feel that it’s Bernie’s office to give away. The amount of duplicitous effort required to torpedo his strong reputation would almost certainly break parts of the national spirit that haven’t already been shattered by previous idiocy like Russiagate or the pathetic charade of the impeachment.[1]

The best-case scenario is for the Democratic party to torpedo itself along with the Republicans and for something stronger to rise from the ashes. Bernie is not a radical: he wants what Americans have wanted for decades and decades. He wants what other people have in other, similar—better—countries.

Workers of the World, Unite

Just by way of example, the following is a call to action for German workers to shake off the shackles being imposed on them by an upsurge of American-style capitalism cloaked in the mantle of “startup” companies. 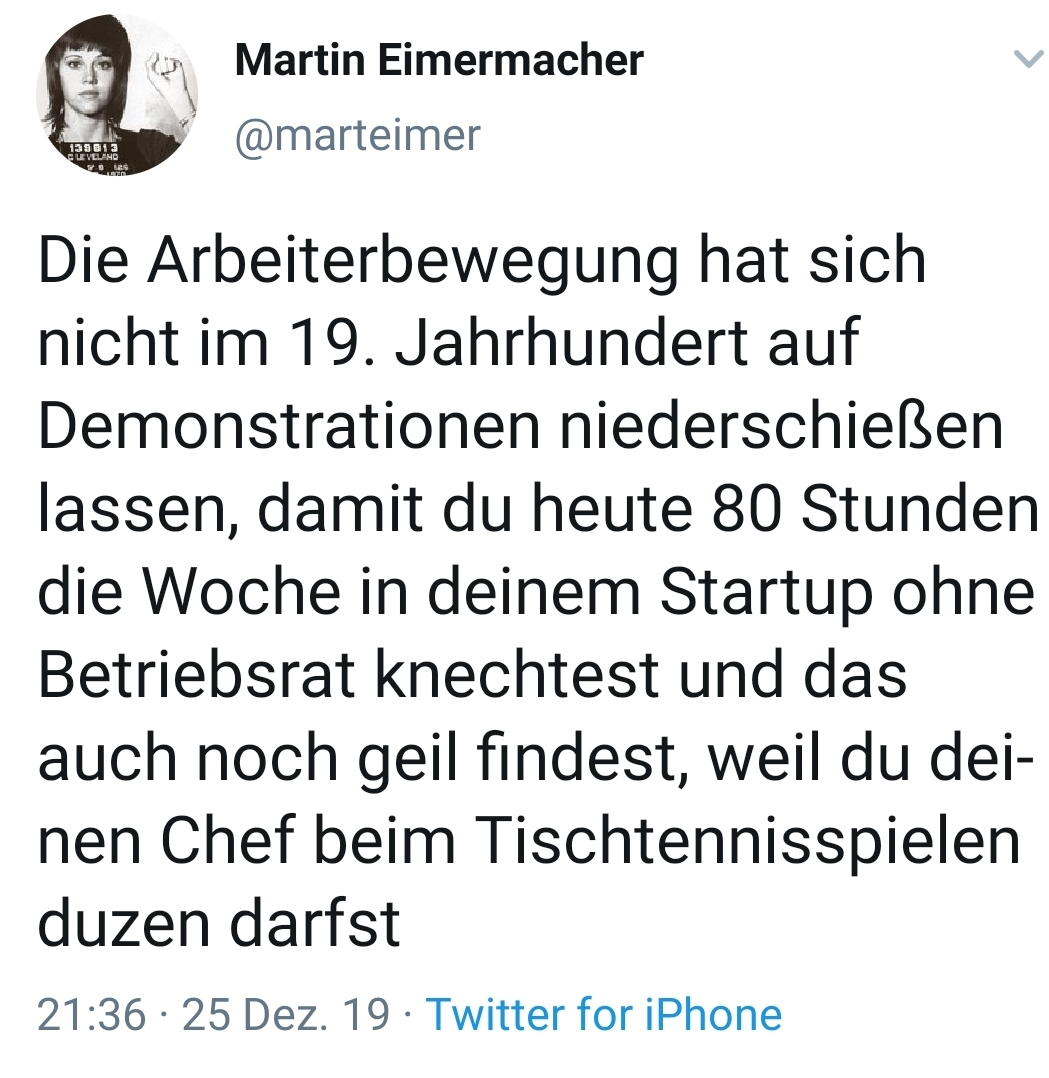 It is a message from “Martin Bucketmaker” (almost certainly not his real name) that states,

“The worker’s movement didn’t let themselves be shot in the streets in the 19th century just so you can subjugate yourself at a startup, where you don’t even have representation on the Board, for 80 hours per week, and you think it’s super-cool because you get to call your boss by his first name when you play ping pong with him.”

The “Betriebsrat” is something that Bernie Sanders is pushing for the U.S. as well: it’s a legal requirement for worker representation on the Board of Directors for companies over a certain size. Germany’s had it for a long, long time.

Richard Wolff is a National Treasure

Speaking of Germany, there’s Karl Marx (who, you’ll learn in the video below, actually spent most of his career in England). And the best introduction to Karl Marx that you could possibly get is from Marxist Economist Richard Wolff. Like Bernie, he’s been singing the same tune for decades and people are finally starting to listen.

The following is a nearly 2-hour video, every minute of which is worth watching. I know that’s a tremendous ask in a day and age where you can binge-watch 10 hours of Netflix until the wee hours of the morning, but educational videos have to be under 5 minutes or boredom sets in. If you want to feel like you’re “skipping ahead”, then jump to about 52 minutes in to hear Wolff’s long answer to the question “how does Marxism relate to farmers today?”

…after which you can go back and watch the rest of the video, because it’s really good. If there’s no way you can get behind Wolff’s mesmerizing didactic stylings for two hours[2], then maybe this next video is more to your taste: It’s Killer Mike (originally of the Hip Hop group “Run The Jewels”) delivering a tremendous 2-minute introduction for Bernie Sanders.

It’s only two minutes. You can power through. I think it’s a pretty inspiring intro.

If Sanders actually makes it to the Democratic Convention with a chance of being nominated, he should definitely get Killer Mike to introduce him.

I didn’t watch a single second of the process. I only read the charges and the articles of impeachment, after it was over. I tend to agree with The Articles of Impeachment Should Have Been These Instead by Ted Rall, where he writes:

“Donald Trump deserved to be impeached. He deserves to be convicted in the Senate.

“Every president has committed high crimes and misdemeanors that could justify impeachment.

“But not on these charges. Not for threatening to withhold $400 million in aid that we shouldn’t have been sending to Ukraine in the first place, not as long as 38 million Americans are poor. Not for trying to dig up dirt on Joe and Hunter Biden; American voters have the right to know that the leading candidate for the Democratic nomination for president and his son are on the take.

“Certainly not on the nonsensical count of contempt of Congress, which punished the president for the crime of using the legal system to defend himself.”

The Rall article continues with an extensively detailed list of reasons for which Trump should have been impeached instead. He concludes with,

“Instead, Democrats have indulged in a pro forma charade that will set an awful precedent, tempting the House of Representatives to impeach every president of the opposite party over every little thing. They’ve trivialized an only-in-case-of-emergency process into a rushed lark, ignored what really matters and squandered the opportunity to hold the president to account for his many crimes and sins.”